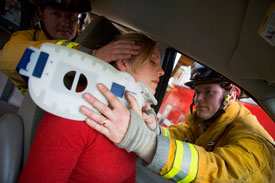 You Cannot Use Accident Reconstruction To Predict Injuries With Any Degree Of Accuracy.

This study by Siegmund Et al published by the Society of Automotive Engineers in 1997 1 performed over 100 rear-end crash tests with human volunteers at two different speed changes. The test subjects were seated in a 1990 Honda Accord (2730 lbs.). All of the subjects underwent a crash at a 2.5 mph change in velocity crash as well as a second set of crash tests at 7 mph impact speed from the bullet car, a 1975 Volvo 240D (3030 lbs.).

Under the tightly controlled circumstances with subjects of similar build and age, seated in an ideal position relative to the seat back, with their head straight and wearing a seat belt there is almost a 100% variation in the peak head acceleration of the occupants. The peak head accelerations ranged from 6.7g to 12g. This finding indicates that accident reconstruction cannot be used to predict head acceleration with any accuracy. Imagine trying to figure out peak acceleration outside a laboratory without the patient seated properly with head slightly turned or 3 inches away from the head rest. What variations might you find? The bottom line is those accident reconstructionists who fabricate a proper looking, 8-page report based on a couple of crappy pictures that were shot at night and based on 40 year old research with 7 test crashes are writing fiction.

The other major finding is that the 1990 Honda Accord used in the testing was hit over 100 times by a larger vehicle up to 7 mph and did not sustain obvious damage. As we have learned, federal standards for bumpers state the bumper is supposed to break at 5 MPH. In practice, most if not all do not break until over 10 MPH. 12g head acceleration was reached in a 7 MPH crash, how much more force is created in a 10 or 11 MPH crash? What would change if the bullet car was 500 lbs. heavier or lighter than the target car? How would it change if the bullet car was a truck with a steel frame? Women in this test averaged an 8 percent greater peak head acceleration than did the men. Where is that noted in your last accident reconstruction report?

The facts are the facts and bringing these to light will be helpful in debunking the junk science brought to bear by the majority of the accident reconstruction community.

According to the literature…

Crash Course on Low Impact Car Crashes
In this Webinar, Dr. Quigley will teach you what you need to know to about documenting vehicle damage and…

Read More
Recent Posts
Categories
Back to the top